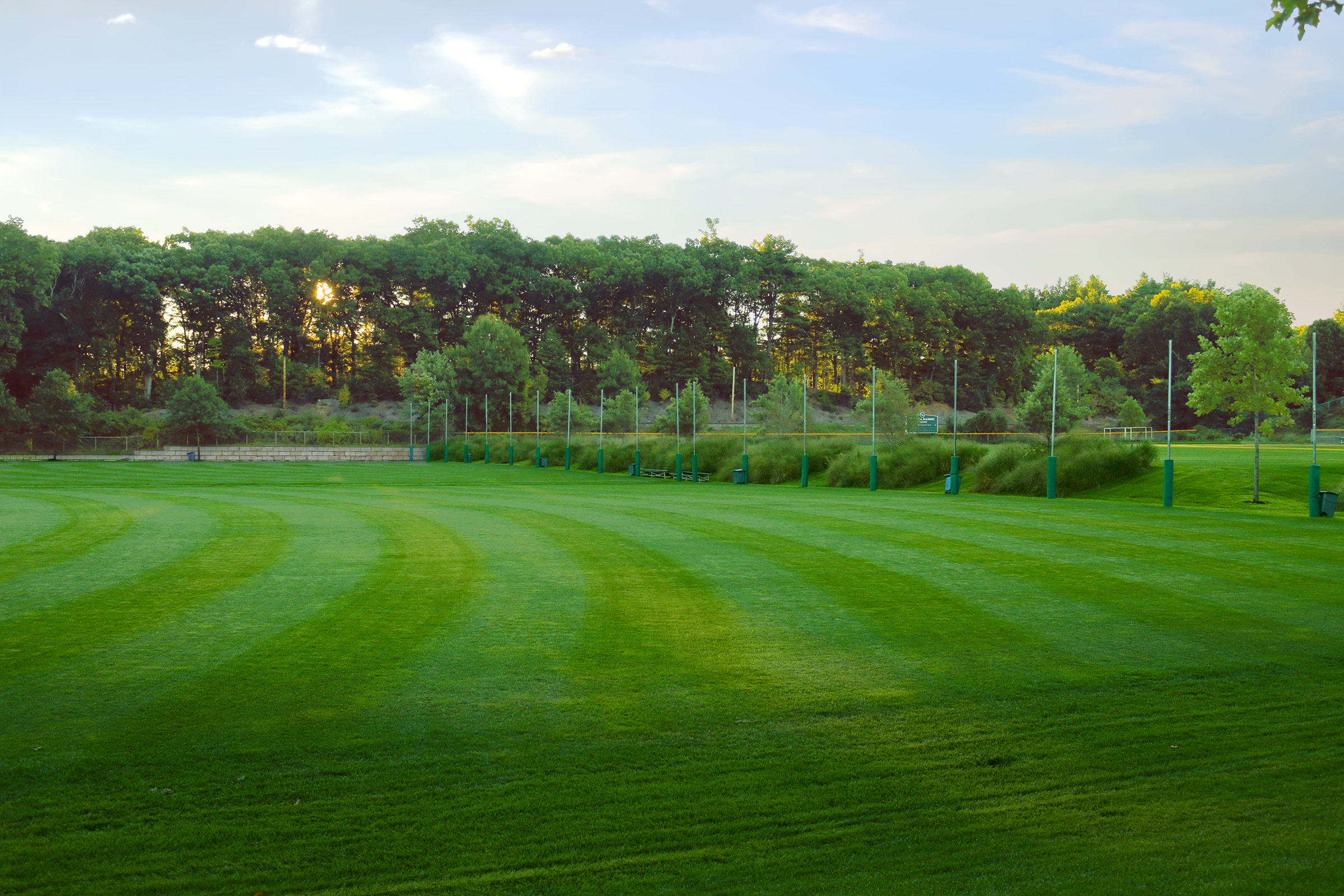 Why the grass is greener
at Concord Academy

Concord Academy stands out as one of the most beautiful and well-maintained college preparatory campuses in Massachusetts. Much of the credit for that goes to Brad Nartowicz, the man entrusted with caring for Concord Academy’s athletic fields and campus grounds since 2014.

As a kid, Brad never imagined he’d one day be managing the grounds of such an incredible property. But he already knew a thing or two about turf.

“My cousin and I started mowing lawns when I was 16,” he recalled. “Before long, I was working on the grounds crew at a local golf course, and after a year at community college, I decided to get serious about turf and applied to the two-year Turfgrass Science & Management program at the Stockbridge School of Agriculture.”

“I only applied to Stockbridge,” he remembered. “I had no backup plan whatsoever.” He not only was accepted; he excelled, graduating with honors. His boss at the golf course told him that if he did another two years at Stockbridge and got his Bachelor’s degree, he could certainly get a job after graduation.

Brad took his advice, earned his degree in 2006, and began working as an assistant superintendent at Black Rock Country Club in Hingham, Massachusetts. He ended up staying at Black Rock until 2014.

“I was looking for a new opportunity when I read about the opening at Concord Academy,” said Brad. Coincidentally, he was familiar with Concord Academy, as his sister had worked there previously. She told the hiring manager about him, and soon Brad had switched from sand traps to soccer pitches.

“It was a little bit of a difficult transition at first,” he recalled. “For example, instead of having 15 or 20 guys to work on a project, there’d be just me.” Brad also had to get used to the idea that he was the go-to guy for everything from irrigation to tree pruning. Maintaining two separate campuses year-‘round – including a 13.5-acre athletic campus supporting soccer, lacrosse, field hockey, and baseball – was a big change for him.

Tom Irwin was already established as a preferred supplier at Concord Academy when Brad arrived on campus, but he hadn’t worked with the company before, so he was planning on using a supplier he’d known from Black Rock. But then he met Tom Irwin’s Brian Luccini.

“I remember it so fondly,” said Brad. “I was set on using this other supplier, but when I met with Brian and talked about all the stuff they had done, I said to myself, ‘Why would you change? Everything they are doing is making so much sense.’”

For Brad Nartowicz, the Tom Irwin Agronomic Planner is his most useful tool on a day-to-day basis.

“I can just call the planner up on my phone and know immediately where I’m at, whether dollars, applications, or what I need for the next month.”

That’s especially handy without a full-time staff to support him.

Brad’s first assignment for Tom Irwin was to help fix a stubborn problem. The athletic campus uses a pond for irrigation and its water is highly sodic due to run-off road salt from nearby Route 2. This caused poor soil structure and turfgrass problems during periods of increased irrigation. The Tom Irwin team recommended adding various calcium sources, including both liquid and granular solutions, into the program.

“They were so helpful and responsive, they did whatever they could to help remedy the sodium situation,” recalled Brad. “Together, we found a solution that has managed to keep our fields green and lush all season long, despite the sodic water.”

As Brad settled into campus life, he discovered that he liked the freedom and the familiarity of working at the Academy.

“It’s such a friendly environment, it’s almost difficult to walk across campus without getting intercepted by someone and talking, whether it’s students, faculty, or staff,” he noted. In particular, Brad has received many positive reactions to his creative grass-cutting designs.

With his busy schedule, Brad no longer attends as many industry events, but he feels he doesn’t need to.

“I don’t have to go to a whole bunch of different places and seminars to continue the learning process. The Tom Irwin programs cover it all. I’ve learned so much about ‘building my brand.’ It’s so valuable, because it only makes me better at what I do.”

Brad believes the programs have had a positive impact on his ability to manage. He keeps a quote from the Tom Irwin Leadership and Professional Development program on the white board in his shop.

“It says, ‘everything starts with goal alignment,’” he said. “It helps me to lay out the steps to effective communication whenever I assign a project to a group of people. It helps to ensure that we have everything we need and everyone is in sync. It really works.”

Those leadership skills will definitely continue to come in handy for Brad at Concord Academy.

“Since I’ve been here, there has not been a year when there hasn’t been major construction on the property,” said Brad. Concord Academy is keeping Brad Nartowicz very busy as it approaches its centennial this year.

Building Stonington's Fields from the soil up